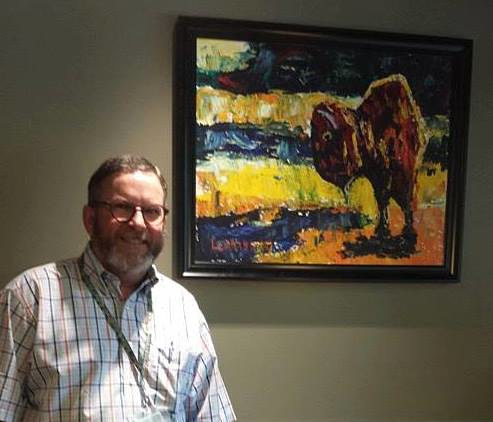 Artist Larry Carter was born in 1964 in OKC, OK.  He was raised in Oklahoma, spent his early adulthood in southwest Montana, but has returned to Oklahoma and lives near Norman with his wife TJ.  Larry’s mother is also a talented artist, and much of his inspiration comes from his father’s Native American heritage through the Chickasaw Nation.

A lifelong passion for sketching transformed into oil painting in early 2010 for Larry.  He found his niche as a painter early on, including winning an award for his very first effort.  He focuses on bold colors and strong contrasts in aiming to depict scenes that evoke an emotional response for the viewer. Larry’s unique art style for his abstract native pieces is self-taught.  He also enjoys painting en plein air and has attended master artist Kim Casebeer’s workshop.

Larry has exhibited at numerous art walks, festivals, and shows in the last ten years, and has won multiple awards including a first place ribbon for the annual staff art show at the University of Oklahoma.  He has twice been pictured on the cover of the monthly Chickasaw Times newspaper, along with a feature story in the May 2016 edition.

Larry was selected as the Featured Artist for the Oklahoma City Area Director's IHS Awards Ceremony in 2018 and again in 2019.